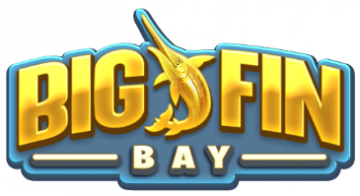 It’s the perfect day to go fishing in Thunderkick’s Big Fin Bay slot! The captain, who looks so much like Popeye, has the boat ready to haul in some big catch. With up to 117,649 ways to win in the Bonus game, this online slot takes you to what looks like an Italian or Greek seaport, where you can throw your fishing rod, hoping a fish might bite the bait. However, the number of ways to win might trick you into thinking this is a Megaways slot. Well, it’s not. Big Fin Bay is a 6-reel videoslot with a huge number of ways to win.

Big Fin Bay – what you need to know

The Big Fin Bay slot has a rather retro vibe to its symbols and backdrop. Put differently, the innovation of this online slot isn’t in its symbols but its mechanics. In the base game, the number of ways to win is 5,040, while during the bonus round, it can go as high as 117,649. There’s also the free spins feature, where the reels can hold up to seven symbols, and a Mystery Wild round that makes sure three reels get covered with Wilds, which adds to the fun. So, I see no reason why you won’t hop on the captain’s boat and sail to the fish-rich part of the sea.

Big Fin Bay takes place inside a bay, with parts of the shore and of the city being visible on both sides of the screen. The symbols depicting four types of fish and a captain have a cartoonish touch, while the rest of the background looks painted. The main character is the golden merlin that acts as the Wild and the Mystery Wild. The Anchor, which is the Bonus symbol is another a key element in the gameplay. So, land anchor your boat, and start fishing! All in all, Big Fin Bay is a fishing-themed slot through and through, no doubt here.

Big Fin Bay comes with a classic grid setup in the base game that, during the free spins, becomes more dynamic, having the ability to hold up to seven symbols on a reel. This influences the number of lines you can form in both situations. There are 5,040 ways to win in the base game, while in the bonus round, the number increases up to 117,649. The volatility remains high during the entire gameplay, while the RTP is 96.14%.

The gameplay might look familiar for Megaways slot lovers. Similar to the Megaways engine, this online slot features variable ways to win, yet, it doesn’t have the Big Time Gaming’s mechanics. For starters, the number of ways to win in the base game in Big Fin Bay is fixed to 5,040. Also, the cascading wins are nowhere to be found. So, Thunderkick kept the engaging type of mechanism obtained with a Megaways engine without actually building one. That’s clever if you ask me.

As for the symbols, the high-value one is, of course, Popeye, with a max award of 7x the stake. The red, purple, green, and blue fish follow him, with prizes between 3.2x and 2x for six on the screen. Now, although the Wild and Bonus symbols don’t pay per se, they can trigger the features of this videoslot. I guess they’ve made up for it quite nicely.

The Big Fin Bay slot can be played on mobile devices, tablets, and PCs. Of course, it depends on the casino you want to play at.

There is the big bonus feature, the free spins, and two smaller ones, the Expanding Wilds and the Mystery Wilds rounds. All can award decent wins, but the big catch can be hauled in the free spins.

This feature is pretty straightforward. When a Wild hits in a winning combination, it expands, adding Wild symbols on the entire reel. This way, you are given a chance to create more pay wins.

This round is juicier than the expanding wilds one for a few reasons. First, it involves a new symbol, the Mystery Wild. It looks just like the normal Wild, only it’s engraved in a golden frame. Second, it triggers randomly in the base game, and third, it covers up to three reels with Wild symbols. This means you can play with half the reels on the screen full of Wilds. Sweet!

The free spins mode in the Big Fin Bay slot is activated like in most online slots. You’ll need at least three Scatters on the screen to unlock it. However, the chances of getting more free spins increase with the number of Scatters that triggered the round. In other words, each reel containing a triggering symbol awards a random number of free spins, up to six.

Now that you know how many free games you’ll play, it’s time to talk more about what’s happening in this round. The first thing you need to know is that each Wild expands, covering the entire reel, and triggers a respin. As the respin starts, the number of symbols landing on the said reel increases by one. This way, the number of ways to win increases too. The number of symbols on a reel is also linked to the free spins. More specifically, when a reel reaches its max symbols (seven), you are awarded three extra free games. Simply put, more Wilds, more free spins.

Big Fin Bay managed to create almost the impossible. It put together winning mechanics that brings back memories of the Mgaways engine while still keeping its distance to BTG’s symbolic mechanism. However, the gameplay isn’t impacted a bit, for it features a free spins round, with surprise respins, and a mystery wild feature that fills up to three reels with Wilds.

So, in my opinion, you can throw your cast net without worrying. The game’s free spins mode, where up to 117,649 ways to win are possible, and its Wilds features can come with catches of up to 15,040x the stake.

If you like our Big Fin Bay slot review, then you should read the following:

Play it on Wolfy Casino